The United Show Tippler Club was founded in 1891as the 'United Tippler Club'.
It is one of the oldest of the British pigeon breed clubs in existence.

The club has a long and chequered history,and after several years of inactivity,
the Club is once more up and running.
Hopefully this new era will see a resurgence
in the breed and the club.

The English Show Tippler has a complex genetic make-up and has,
for far too long, been regarded as a 'difficult' breed.
There seems to be a mystique about the breed and sadly far too often
the genetics of the breed hasbeen misunderstood.
The Show Tippler is not a 'difficult'  breed, but, like all breeds,
breeding a good one is never going to be easy!!

The stock of English Show Tipplers worldwide
is now extremely limited and descends almost entirely from the birds
of the late Ken Shaw. For more than 50 years
Ken Shaw bred the Show Tippler to the highest standard
and was awarded a 'Master Breeder Certificate' by the NPA.

The majority of Show Tipplers elsewhere in the World
have been widely crossed with other breeds and are very different to the British stock.
At the 2012 European Show in Leipzig there were just two English Show Tipplers!
We need to ensure that the English Show Tippler continues to survive in its purest form.

If you keep the breed, have any photographs, articles, or information about the breed,
or are just interested in the breed,
we really would like to hear from you!

The Show Tippler is not a 'Flying Breed' and must not be confused with
the Flying or Competition Tippler. They are ineligible for
show if they carry a ring intended for Flying birds
(ie NTU,  NCTT, NRTT)
and must be disqualified from competition. 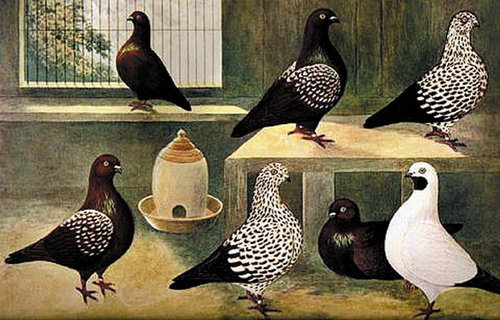 The four varieties of the English Show Tippler as depicted in 1912.
The Self
The Dark Mottle
The Light Mottle
The Chuck